A Twisty Ride Down Lombard Street 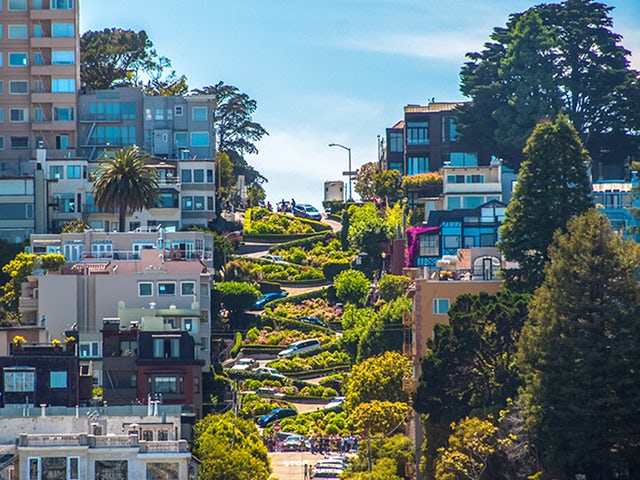 Perhaps you have heard of Lombard Street, the world famous street purported to be the “The Crookedest Street in the World.”

Perhaps you have heard of Lombard Street. This is the world famous street in San Francisco that features eight sharp hairpin turns and is purported to be the “The Crookedest Street in the World.” Due to this moniker and its scenic brick roadway surrounded by Russian Hill mansions and perfectly manicured landscaping and flowers, the street attracts over two million annual visitors, and daily queuing for up to 10 hours.

These crowds understandably create massive traffic congestion on and around the 1000 block of Lombard Street in a city already famous for its heavy traffic volumes. As such it has become an issue for both the local residents and the city and county of San Francisco.

To address this issue state Assembly Bill 1605 was created to locally approve a reservation and pricing pilot program for vehicles to use Lombard street. If approved drivers would need to register for a time and date in advance and then pay a fee of $5 per car on weekdays, and up to $10 on weekends and holidays to drive this one block stretch. How or where this fee would be collected or how this would be enforced is unclear as of this writing. If passed the city would be responsible for determining the exact cost and enforcement details.

As of this time the bill has has passed the Assembly Transportation Committee by an 11-to-3 vote and is expected to go to a floor vote on the assembly floor at the State Capitol on May 2nd.

With the traffic and the soon to be cost and hassles of getting a reservation one has to logically ask…. Is it worth it to drive down 1 block of Lombard Street? This writer would have to suggest that the answer to that question is….No!

To truly Travel N Relax we would suggest instead taking an enjoyable cable car ride to nearby Fisherman’s Wharf and then walking the nine blocks to the base of the street where you can take a great photo looking up the hill at all the curves. If you are ambitious you can also walk up the hill for additional shots.

Alternatively the Hyde Park Cable car will take you to the top of the hill or city buses down Columbus Ave can get you nearby. However you arrive you will know you are there when you see the large crowds at both the top and bottom of the hill!

This type of visit allows you to avoid sitting in gridlock both getting to the hill and sitting on it. This also allows you to visit for free and without the need for advance reservations.

Ironically despite its fame, Lombard Street is not the “The Crookedest Street in the World,” nor even in San Francisco. This honor belongs to Vermont Street between 20th and 22nd streets in the Potrero Hill area of the city.

While not as famous but much less crowded due to its lack of streetside flower gardens and more city like look you could also visit for free without the large crowds of people Lombard street attracts. While here you could also enjoy a picnic at the adjoining McKinley Square Park which also offers some good views of the city.

Either as a pedestrian on Lombard Street or as a visitor to Vermont Street it will be a much more relaxing way to visit San Francisco and Travel N Relax without the traffic crowds or the reservations or fees.